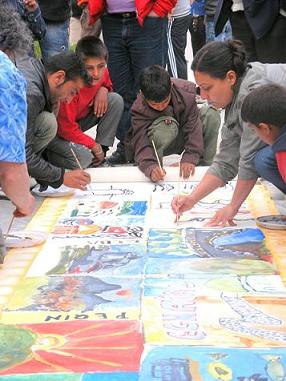 VEF considers art and music as powerful media to develop consciousness of common history and future. Art is a way to further peace, friendship and cooperation. As such VEF is active in organising concerts and exhibitions.

Children's painting: during the Caravantour a big Via Egnatia-painting was made by children from all nationalities along Via Egnatia: Albania, Northern Macedonia, Greece and Turkey. This painting has been exhibited in Istanbul in 2010, and can be seen on VEF manifestations in the Netherlands.

Concerts: we hope to organize a series of concerts along Via Egnatia. Musicians from the different VE-countries will participate. The concerts will be coupled with music-camps and masterclasses for young and old international participants.
The Via Egnatia Cross Border Band will play on different festive occasions and combined with lectures on Via Egnatia, mainly in western Europe.

One of the participating organisations is the IRAM-Institute of Balkan Music. It has a large (online) database of Musical Balkan Heritage. They will plan an international conference on music along the Via Egnatia.