The Via Egnatia Revisited - Reanimation of an old road
Start-up Conference, 20-22 February 2009

The proceedings of this conference have been published. Free download under publications

High on the hills of Pelister Park the conference started with heavy snowing and bad weather forecasts, so that many people were unable to come. Especially the Albanians had problems to reach the place, so we regretfully missed Mrs. Abazi, Mr. Ceka, Mr. Doja, Mr. Gedeshi and others. In spite of this on Thursday evening already the hall vibrated with talk and song, a promising sign!

Still the audience consisted of about sixty-five people, as the missing persons were spontaneously replaced by interested people via the embassy and the municipality, i.e. from the Volunteers-service and the American Peacecorps. 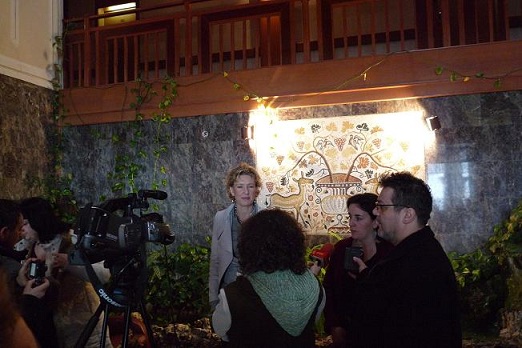 On Friday morning the Dutch ambassador, Mrs. Simone Filippini opens the conference with a speech on the possibilities of this Via Egnatia-revival. She stresses the connection and the cooperation this conference could generate. "I can already feel it", she says. The concrete economic effects it can have for the people along the road, the fun of a wander trail along the VE. She likes wandering, Mrs. Filipini, and she wants to join the Karavan walk herself. She ends with an advice for all of us: "Dare to connect, use this unique opportunity to meet each other."
On the picture Mrs. Filippini is interviewed by a TV-crew in front of a replica of a mosaic found at Heracleia in Bitola.

Next the mayor of Bitola welcomes the Via Egnatia Foundation in his beautiful town and wishes the conference lots of success.

VEF-coordinator Marietta van Attekum speaks next on the spirit of a town like Bitola, city at the crossroads from ancient times on, where many nationalities meet.

The first day was dedicated to THE FAR PAST AND THE PRESENT, so the archaeologists start with giving the audience a bird's-eye view on Via Egnatia. Professor Vjincic, eminence grise on Via Egnatia, gives a short speech on the vicissitudes of study room work and fieldwork. He hopes that we can carry some of his lifework on VE further. Then dr. Lilcic speaks extensively on VE in Albania and Northern Macedonia, enlivened with a lot of slights, presented in an up-tempo. Happily Holger has studied Mr. Lilcic' work and the maps beforehand, so at least he can follow easily. Mr. Lolos from Greece continues, with an overview of the remains of the whole VE, with an accent on Greece. Thanks to Mr. Lolos' recent book he can present beautiful photographs and clear maps, which give the audience an impression of the road, the bridges, remains of bathhouses, etc. The audience engages hereafter in lively discussions about options of walking, restoring and cooperating. Although the Albanian and Turkish experts were missing, these two speakers succeed in giving the audience in short time an overview and impression of the whole road, its problems and possibilities, which is of great use for the rest of the conference. The particularities of the Turkish part of the road will have to be addressed on another occasion. 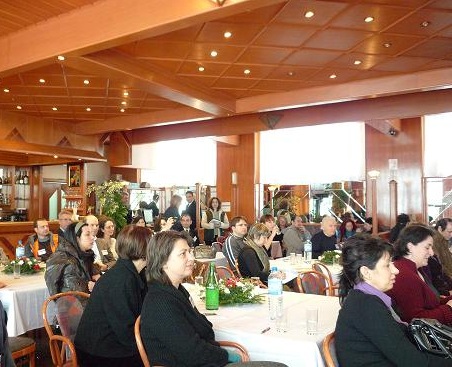 In the afternoon the arena was for professor Detrez, historian and linguist, who speaks on the cultural unity of the area, which impresses more than the national differences. With examples of language, music and popular culture Mr. Detrez shows the Balkans common history and cultural heritage, from Byzantine times through Ottoman institutionalization. However the stress on the common culture versus the particular (nationalistic discourse) has always tended to converge and diverge. Beware for the too easy an explanation - things are complicated.

After this Paula Jansen gives an explanation on how the Via Egnatia Foundation wants to work, what our goals are and how we want to reach these.

We proceed by working in the subgroups, as planned beforehand. There were 6 subgroups, with international teams formed around the following topics: 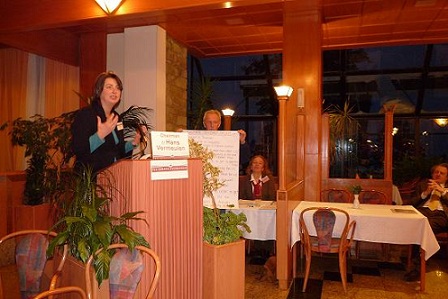 All of these groups were full with about 10 people, only the last one was a bit small ( 4-5). These groups have worked together on finding common ground and new ideas on how to cooperate. They started with acquainting and brainstorming, and during the next days they worked out their plans more concretely. These results are presented at the end of this account.

In the evening the film "Whose is this song" by the Bulgarian filmer Adeela Peeva is greeted with much enthusiasm, but sadly, the film breaks down after half an hour and we cannot get it right anymore. On the next conference the new version!

The second day, Saturday, we concentrate on CULTURE ALONG THE VIA EGNATIA. To our delight the weather is better and a small Albanian delegation has arrived.
Mrs. Dragica Zivkova starts the day with an interesting presentation on VE in Ottoman times, focused on Ohrid. She has diverse information on trade and traditions, which is, especially after the overview of Friday, illuminating. Beautiful photo material is presented with the lecture, from the Macedonian photographer Cvetko Ivanov.
Then follows a presentation by Mrs. Ilknur Kolay from Istanbul, who is so kind to replace Mr. Machiel Kiel (who was in hospital), and makes use of his image-material on the Caravanserais along the VE (and elsewhere). Also here the imagination of the audience gets a lot of material to build on. The images are revealing and the history of neglecting and destroying these impressive buildings, which were sometimes almost big as cities, is shameful. It would be very good if - in the future - we could do something about restoration of these places.
After the coffee break follows Mr. Buzarovski, with his students Trena Jordanoska and Aleksandar Dimitrijevski, who present a videotape of their music-institute IRAM. This institute gathers material from all the Balkan, but mainly from Northern Macedonia, and does a great effort to digitalize all this material and make it public. The audience greets this initiative and all the presented music with excitement. Riki van Boeschoten suddenly recognizes three women on the film from her own research on the Greek “Paidhomazema”.

After lunch we go for a tour down to Bitola, and visit the museum, an orthodox church, a mosque and then the Site of Heracleia. Meanwhile the atmosphere is so spirited, people get to know eachother more and are “daring to connect”. In the bus, and the halls many new ideas are talked over and there is a lot of laughing. New connections, beside the subgroups are made. New plans are conceived.

Back in Molika we enjoy the presentation of professor Kostas Giakoumis from Tirana, who shows us the Byzantine images of the time of the Palaiologoi, from the area of Western Albania (Apollonia, Durres, Berat). In fact he shows that the Byzantines purposely made use of religion as a cohesion enhancing force. Read the

The evening is filled with music and dance, until the small hours.

On Sunday, THE FUTURE, there are three presentations of promising cross-border research by Mrs. Fotini Tsibiridou, Mr. Dimitris Gkintidis and Mr. Ioannis Manos. Here it is important to stress that the inter-Balkan summer school of Ioannis Manos in Konitsa (Greece) is a very interesting existing project, to connect some of our activities with.
Due to weather conditions again, we have to shorten the program a bit, so that people can leave in time to reach their destinations. This means that the presentation on the Caravan tour has to be left out, and the rest is condensed in the morning.

Results of the conference

Local branches of the VEF are established. 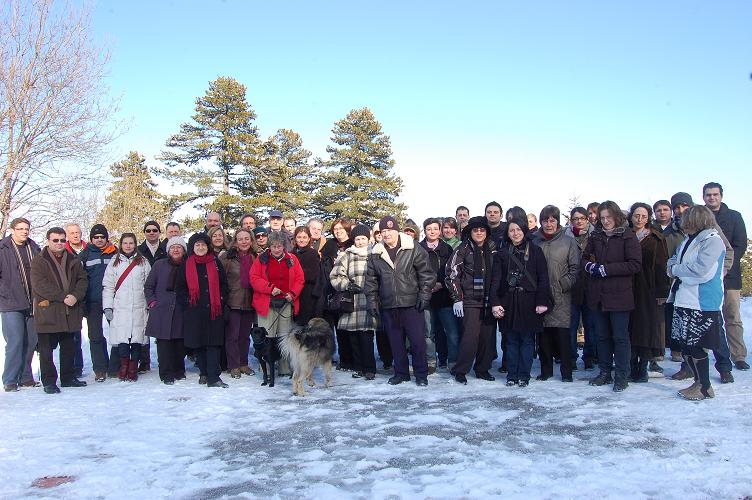